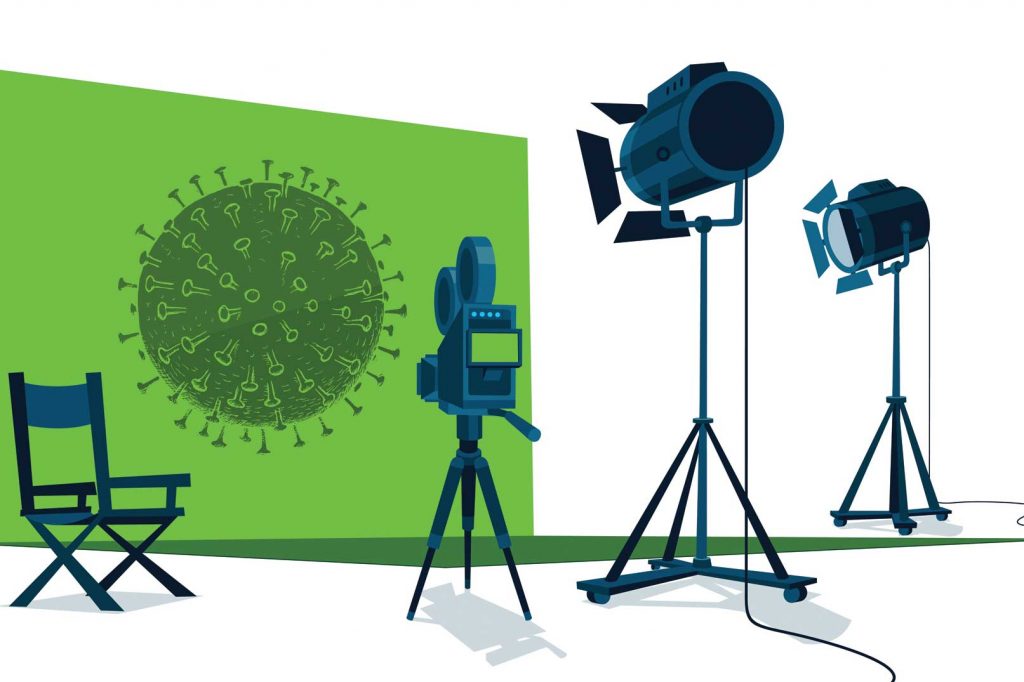 This article was originally featured in the ABA Banking Journal.

On Saturday, April 4, 2020, Jim Rieniets stands in a conference room at Nashville-based Insbank and looks at a video camera.

“Members of our team are working diligently to access the Small Business Administration’s systems” to make Paycheck Protection Program loans, he says. “To get these funds distributed as quickly as everyone would like is akin to drinking water from the release of a hydroelectric dam.”

The tone grows serious as Rieniets reminds viewers about Americans’ sacrifices in previous generations during wartime and economic depression. “COVID-19 is a war. We are fighting an opponent that is threatening our lives and our way of life. In that vein, I encourage everyone to understand that we all will need to make sacrifices and do things to help one another,” he says.

How does this apply to PPP? “In the first few days, demand will overwhelm the system,” he warns. “I encourage businesses that have not already had to furlough employees to pause and allow those businesses that have had to close their doors to be the first recipients of these loans.” Rieniets grabs a package of toilet paper and hugs it to his chest. “You don’t want to be the guy or gal who’s buying or hoarding toilet paper when you have plenty in your closet already!”

The blend of empathy, results-orientation and good humor on display characterize not just Rieniets’ response to COVID-19 but his whole career in Tennessee banking.

Rieniets is spending 2020-21 as chair of ABA’s Government Relations Council, working with ABA’s staff and board to develop the association’s advocacy priorities in a new environment with a Democratic presidency and Congress — albeit a Congress with slim partisan margins that can be expected to drive bipartisanship on major legislation.

Top on the priority list is ongoing pandemic relief, including several provisions achieved in the December COVID-19 relief package — streamlined Paycheck Protection Program forgiveness among other PPP enhancements, the extension of important provisions on troubled debt restructurings and other pandemic-related relief and extension of the current expected credit loss implementation date.

“Members of our team are working diligently to access the Small Business Administration’s systems” to make Paycheck Protection Program loans, he says. “To get these funds distributed as quickly as everyone would like is akin to drinking water from the release of a hydroelectric dam.”

“We would have all hoped that would have come and gone by now,” says Rieniets. “Well, the pandemic’s still here, and these PPP loans are still sitting on bank balance sheets.” Nine months after he cautioned clients doing OK to hold back in applying for PPP loans, he reports that some of those clients are still doing just fine, describing the results in Nashville as a “mixed bag.” Insbank clients in core Nashville businesses like entertainment, tourism and hospitality are experiencing challenges, but the effect of social distancing and stay-at-home orders has fallen irregularly.

“If you’re a high-end steakhouse in the downtown district, you’re having a hard time of it,” Rieniets says. “If you’re a barbecue restaurant and your food still tastes good after it’s been in a Styrofoam container for 45 minutes, you’re doing pretty well.”

Meanwhile, Nashville continued to see in-migration from across the country. Over the past several decades, the Music City wasn’t just about music and tourism — it developed a diversified professional economy driven by health care, technology, manufacturing and publishing, attracting corporate headquarters like CVS Caremark, Bridgestone and Amazon’s future third-largest U.S. corporate base. “Companies have been consistently opting to expand to Nashville. That’s put a lot of fuel behind the growth here,” says Rieniets.

The corporate growth has been symbiotic with population growth — the Nashville metro is home to nearly 2 million residents, up 23% in the past decade and nearly 50% since Insbank was founded in 2000. That continued in 2020 as residents left stricter coastal areas for larger homes and a more business-friendly environment in middle Tennessee, Rieniets says.

Beyond the pandemic response, Rieniets sees several other issues on the table for 2021, including cannabis banking, which is expected to be addressed by the Democratic Congress. Rieniets describes it as a public safety issue in states that have authorized various uses for marijuana. “Regardless of the way bankers may or may not think about this issue, they want to see a resolution to what we see as a real challenge,” he says. “We look forward to seeing some headway.”

Other focus issues will include brokered deposit reform and policies affecting environmental, socially responsible, and corporate governance, or ESG-related investments. “We’re going to be working with the administration on best practices and rules of the game for how we address those issues.”

Rieniets adds that bankers should not fear the political realignment in Washington. “Regardless of what you think politically, if your team is not in charge, you always think it’s going to be worse than it is,” he says. “That’s something I’m quick to point out to bankers who’ve expressed concern about a change in the balance of power.”

He brings firsthand experience to the bank advocacy arena, having previously chaired government relations activities for the Tennessee Bankers Association. “Seeing some of those challenges is what first spurred me to get involved at the state level,” he says. There, he successfully championed elder financial abuse prevention legislation that allowed banks to delay suspicious transactions, notify close family members of any concerns and refuse to accept acknowledged powers of attorney when elder financial exploitation is suspected. The law became a model for other states.

“Jim has been an outspoken and effective advocate on behalf of the banking industry throughout his career,” adds Barrett. “He’s a student of the industry with knowledge of banking regulations and legislation that is second to none. Jim’s leadership of the TBA government relations efforts in Tennessee moved meaningful legislation through the state’s General Assembly, and I know he will have the same impact in Washington.”

For bankers looking to get involved in advocacy, Rieniets says to go for it — but for the right reasons. “Do it to the extent you have a passion for it, and you care for it,” he explains. “Don’t do it to try to put it on a resume. It won’t do you or your industry well.”

He adds that bankers should put their unique expertise within the bank to work in advocacy. “Bringing that expertise to the group is beneficial,” he says. “How can you be most effective? Pick the things that you know best and lever that expertise.”

“One of the early challenges we had of having this statewide footprint and very little capital was that we weren’t going to be able to build branches everywhere. We were an early adopter of technology.”

After graduating from Vanderbilt, Rieniets began building his expertise as a management trainee at the National Bank of Commerce in Memphis (since merged into SunTrust Banks, now Trust Financial). He became a commercial lender and then ran the small business group and correspondent lending group there.

One of his clients in correspondent banking was a board member of a joint venture working on starting up a new bank for insurers throughout Tennessee. Initially known as Insurors Bank of Tennessee — “a post-Gramm-Leach-Bliley idea that independent insurance agents would like a bank to call their own and refer clients to” — the de novo brought Rieniets on as head of credit and lending. Rieniets relocated to Nashville with his wife, Susie, and their growing family. (Jim and Susie today have three children; two college-aged and one in high school.)

With $6 million in capital, the bank’s original business plan soon required a pivot as the much-vaunted integration of banking and insurance never saw the fruition envisioned by many in the late 1990s, Rieniets recalls. “If we’re going to do something for our shareholders, we’re going to need to shift our business model.”

The bank was reborn in 2007 as Insbank, expanding its focus to businesses in the about-to-explode Nashville market. “It’s really become a melting pot,” says Rieniets of the growth in Nashville, which helped fuel Insbank’s rise to more than $600 million in assets.

But even as Insbank capitalized on the Music City, it retained its statewide market serving insurers. “One of the early challenges we had of having this statewide footprint and very little capital was that we weren’t going to be able to build branches everywhere,” he says. “We were an early adopter of technology. We said, ‘Let’s resist the temptation to become a traditional bank.’” For example, the bank offered an ACH conversion product before remote deposits were an option to scan checks and convert them to ACH payments. It offered clients an overnight deposit service through fellow Tennessee-based FedEx.

While Insbank offers clients an up-to-date tech suite, the pandemic helped it capitalize on those investments. “The pandemic has taken that trend that was already happening and forced it on everyone,” Rieniets says. Even after some semblance of normal returns, “the day-to-day banking transactions will remain in the digital space,” he adds. “Our bank might be a decent example for what that looks like. Our bank doesn’t handle cash or have an ATM. Our bank doesn’t have a drive-thru.”

Technology can be advantageous for community banks, and Rieniets is positive about the work-life balance benefits of work-from-home policies. He wants to bring Insbank’s team back together eventually — “we’re a firm believer in getting people together in teams to work on projects” — but Insbank employees have appreciated getting “hours back in their week to do things they want to do rather than spending time on the road” commuting.

And Rieniets has another reason to get employees and clients back together: Insbank’s next film premiere. Rieniets doesn’t only shoot PPP PSAs. Several years ago, he produced a 20-minute video for an Insbank event spoofing pre-crisis excesses in the financial sector. The next video, a parody of The Hangover that spoofed the financial crisis’s regulatory reaction, had higher production values and was even more popular. Eventually, Insbank was renting out a local theater with multiple showings for its productions.

“It became an outlet to connect with clients,” Rieniets says, adding that it tells them: “We take our work seriously — but not ourselves too seriously.” 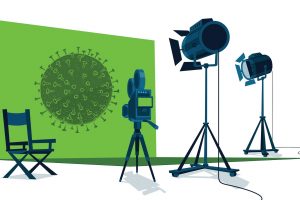 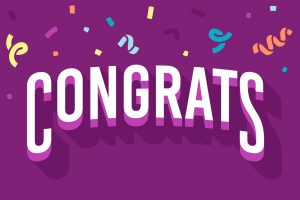 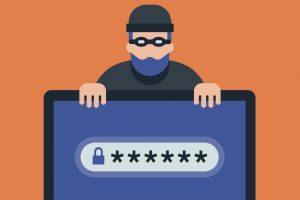